Here’s what you need to know:

Communist Party ousts provincial leader at the center of the outbreak.

China’s ruling Communist Party fired the leaders of the province and the city at the center of the new coronavirus outbreak on Thursday amid widespread public anger over the handling of the epidemic.

Jiang Chaoliang, the party secretary of Hubei Province, is the highest-ranking official to lose his job over the handling of the coronavirus outbreak, which has killed more than 1,300 people in recent weeks.

After the outbreak first emerged in Wuhan the leadership came under intense scrutiny for playing down the virus and delaying reports of its spread. The province then took drastic measures that included imposing a lockdown not only on Wuhan but also on tens of millions of people in surrounding areas.

For hospitals in Wuhan, already overwhelmed with patients, that cordon worsened a shortage of medical supplies that has continued.

Mr. Jiang will be replaced by Ying Yong, the mayor of Shanghai. The selection of Mr. Ying may underline the continued political control of Xi Jinping, China’s top leader. Before being transferred to Shanghai in a fairly senior role in 2008, Mr. Ying had come up through the political ranks in Zhejiang Province, which is Mr. Xi’s political base as well.

The party also ousted Ma Guoqiang, the top official in Wuhan, the capital of Hubei Province, and replaced him with Wang Zhonglin, formerly the party secretary of the eastern city of Jinan. 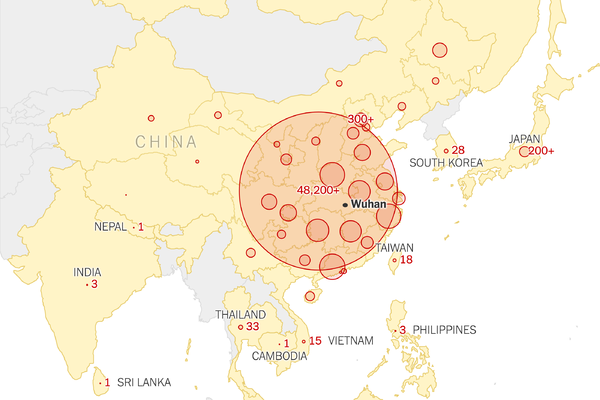 Coronavirus Map: Tracking the Spread of the Outbreak

The virus has sickened more than 60,300 people in China and 24 other countries.

Number of cases in Hubei Province soar to nearly 50,000 as new diagnostic methods are employed.

The number of people confirmed to have the coronavirus in Hubei Province, the center of the outbreak, skyrocketed by 14,840 cases to 48,206, the government said on Thursday, setting a new daily record, after the authorities changed the diagnostic criteria for counting new cases.

The number of deaths in the province on Wednesday jumped by 242 to a total of 1,310, more than doubling the previous daily record of 103 set on Monday.